The age of enlightenment or a culinary revolution!

The Enlightenment marked a turning point in the history of gastronomy. While the era was characterized by peace, there was definitely a revolution going on in the domain of cuisine. Attempting, daring, experimenting, testing… these are the verbs that best convey the spirit of the age. 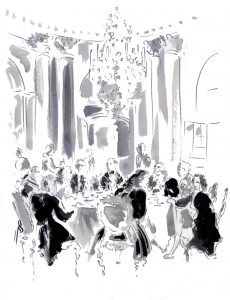 AT THE HEART OF BEAUTIFUL HOMES

When it came to cuisine, methods of cooking food gave rise to innovations such as the stove, which replaced the old hearth that had been the only means used up until then. This new piece of equipment came with a battery of new utensils, including the frying pan, to name but one. Vast numbers of recipes resulted from novelty. Savoring these dishes presupposed a comfortable set-up. The living environment contributed to this, as homes began to feature a room used exclusively for eating, namely the dining room. When the time came to sit down and eat, people opted for round tables that were more conducive to conviviality, bidding farewell to their long, austere counterparts! Alongside these already considerable revolutionary introductions, the most noteworthy related to cutlery. Placed beside the plates, they acquired their definitive shape during the Enlightenment. Tables also welcomed new utensils to complement the dishes served, such as the butter dish and sugar bowl… Glasses, previously simply brought by waiters throughout the feast, now began to appear as part of the décor. This new way of giving them their own role to play sharpened the creativity of the great crystal-makers who unremittingly created a wealth of pieces, each more beautiful than the last. While the tone was set in the kitchen, it was around the table in the dining room that gastronomy became a serious business.  But what was on the menu? Gluttony gave way to refinement. Quality came to be regarded as more important than quantity! Dishes were served one after the other, in a logical order, with starters, main courses and desserts, nothing like previously, when food was served continuously and in no particular order. This was the time when professions were born, such as the pastry-chefs to whom we still owe madeleines, babas and meringues. But epicureans only had eyes for sauceboats! While sauces had been almost solid during the time of Louis XIV, who liked eating with his fingers, things were now very different. Lighter and creamier, they were to be found accompanying all meat and fish. Mayonnaise and béchamel were invented. 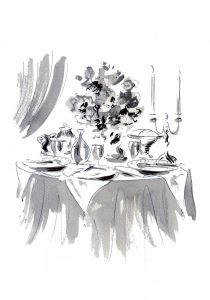 A revolution also took place among the not so wealthy and it was stirred by the potato! Antoine-Auguste Parmentier, by inventing his mashed potato dish, made it part of everyday life. People wishing to have a meal could also by then decide to go to a restaurant. The first tavern offering clear soup – the only dish on the menu – is widely believed to have been set up in 1765 by a Parisian chef named Boulanger. The first restaurant in the form that we now know it, was also opened in Paris, by Antoine Beauvilliers in 1782.

The Enlightenment focused on product quality. Dishes were lightened and improved. People sought the quintessence of taste. Elegance and refinement at the table were greatly appreciated. And all this work and these revolutions gave rise to many dishes and other desserts that are still jewels in the crown of French gastronomy. A specialty that has its own dedicated name: art de vivre, the art of living!

Jérôme Banctel reveals his vision of gastronomy in an extremely beautiful book.

Feasting the eye as much as the palate

Whatever you are savoring, it must of course be delicious.But before the fork reaches the mouth, the first impression is a visual one.

– Gastronomy – Niels Rodin,a zest of originality Based near Lake Geneva, at the foot of the Jura mountains, Niels Rodin is a happy man. He has turned what was merely a personal passion ten years ago into a living as citrus-fruit grower. The very thought of citrus fruit conjures up images of warm, sunny […]