A glass brimming with joyfulness

No party or celebration takes place without champagne – the drink universally regarded as synonymous with special moments and which has been unceasingly loved, adored and savored through the centuries by celebrities and ordinary people alike. What exactly lies behind the bubbles providing such a wondrous feast for the eyes as well as a fizzing treat for the tastebuds?

FIRST OF ALL, A LONG HISTORY

The first traces of production appear during the Gallo-Roman era, even though the beverage was far removed from that which we now know. Evidence is found throughout the centuries of its presence on the tables of royalty, but it was not until the Middle Ages and the influence of clergy working the vineyards that the Champagne region began to develop.

Amongst the monks who took care of the vineyards was one to whom we owe everything! A certain Pierre Pérignon, known as Dom Pérignon, had the good idea in 1670 of blending grapes of various origins to achieve an incomparable taste and result. According to history, his decisive innovations also included maturing wine in bottles rather than barrels, thereby optimizing the process, as well as the cork stopper ensuring the perfect effervescence of this sweet beverage.

From then onwards, champagne was well on the way to its success that has remained undimmed ever since. Its name became associated with those of great Houses that are still famous today, such as that of Barbe-Nicole Cliquot née Ponsardin, the first woman to take on the management of a champagne company upon the death of her husband in 1805. With an annual volume of nearly 350 million bottles, champagne has never had any competition when it comes to partying. Be it a Formula 1 victory, the launching of a ship, summiting Everest or simply a great moment to be shared, the occasion is inevitably accompanied by small sparkling bubbles.

CHAMPAGNE AN ART ALL OF ITS OWN

Champagne is a French beverage produced exclusively within a set perimeter around the city of Reims. According to the technical specifications of the Champagne appellation, only three grape varieties can be used: Chardonnay, Pinot Noir and Meunier. Even the pruning of the vine has been subject to certain obligations since 1938. Although the legal maturation time to obtain a vintage champagne is three years, the best bottles are often left to rest for far longer in order to obtain an optimal result.

To give the bubbles their maximum amplitude, champagne should not simply be knocked back! In order to preserve all its refinement, originality and effervescence, it should be served at a temperature of between 8°C and 10°C. Contrary to popular belief, flutes and coupes are not the most appropriate glasses. In fact, a tulip glass or better still, a glass shaped like a rugby ball, will optimize the taste and aromas. And as for the bubbles, if you want them to be as pretty and sparkling as possible, the glass in which the champagne is served should be washed in hot water without detergent. Quite an art!

• The vineyards of Champagne cover a production surface area of 33,573 hectares.

• 15,700 vintners work with the grapes, while 300 companies market champagne.

• The total worldwide turnover from sales of champagne amounts to 4.4 billion euro, of which 2.3 are from export.

• The biggest consumers of all exported champagne are the English, with an annual consumption of more than 30 million bottles, while the Americans are in second place with more than 17 million bottles.

• Research tends to show that a bottle of champagne can produce up to 100 million bubbles. 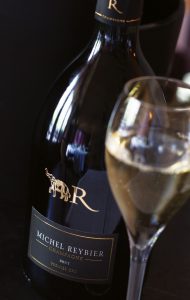 For an aesthete who nurtures excellence in his establishments and vineyards, it goes without saying that the choice of champagne must be the best possible. Michel Reybier Champagne is a highly original blend made solely of Chardonnay and Pinot Noir grands crus and premiers crus from Champagne. Stemming from rigorous selection of the dedicated vineyard plots combined with acknowledged technical expertise in winemaking and aging in oak barrels, this tête de cuvée (the original appellation given to the best champagnes) reflects a certain art of living.

Epicureans appreciate its fine bubbles as well as the elegant, classy nature of a great wine. Produced in small quantities and distributed selectively, Michel Reybier Champagne will appeal to connoisseurs in search of something exceptional.

« Crystal
Jacques Rougerie, the architect of the sea »

– Interview – Raphaël Enthoven a philosophical stroll around the theme of wonderment Accurate wording, fast-paced delivery, thought patterns that are both deep and airy: Raphaël Enthoven cultivates a close relationship with wonderment. He agreed to discuss his enthusiasm regarding this “fundamental” philosophical subject with us in a captivating and astonishing interview. Professor of philosophy […]

Aging youthfully and more if possible

Aging youthfully and more if possible The most recent scientific discoveries and latest developments in digital technologies open up staggering prospects in the realm of health and longevity. Eternal life… an ancient fantasy which leaves nobody indifferent. The idea that aging could be a reversible phenomenon and that as of today one can stack the […]

Olivier Kuntzel & Florence DeygasStrokes of genius There are two of them… and each is unique. Their brushes give birth to whole worlds of inventiveness and utter poetry. From the title sequence of Steven Spielberg’s Catch Me If You Can movie to the Parisienne in Guerlain’s “Little Black Dress” campaign and on to the “MiCha” […]

Jacques Rougerie, the architect of the sea

Jacques Rougerie, the architect of the sea A passionate realist, a pragmatic dreamer, a visionary turned project manager, Jacques Rougerie has travelled the world, met the peoples of the water, spent a considerable amount of time on subaquatic expeditions and combined his two passions – architecture and oceanography – by devoting his life to them. […]