Jacques Rougerie, the architect of the sea

A passionate realist, a pragmatic dreamer, a visionary turned project manager, Jacques Rougerie has travelled the world, met the peoples of the water, spent a considerable amount of time on subaquatic expeditions and combined his two passions – architecture and oceanography – by devoting his life to them. This man who has become a mérien lives in a perpetual state of wonderment mingled with complete lucidity, choosing to look at the world from another perspective in order to imagine what it will be tomorrow. We share a few highlights from a fascinating encounter. 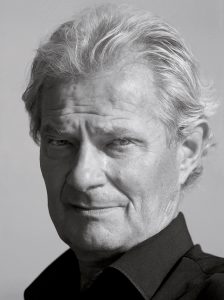 You see the ocean as an adventure – the great expedition of the 21st century: what is it that fascinates you so much about oceanographic exploration and when exactly did you develop a passion for the underwater world?

The ocean has always fascinated me. I was born in Paris, but I spent the first ten years of my life in Abidjan, capital of Ivory Coast, which was the first time I saw the sea, the wind, the waves, the big African beaches, fishermen, the dugouts… The Ocean was my horizon and my fascination for it is inexplicable – it just is. As for the underwater world, it was the first thing I read about and the stories as well as the people surrounding an explorer father led me to discover it.

Which encounters turned out to be decisive and at what point did you place your two passions –architecture and oceanography – at the service of underwater exploration, science and humanity?

I met Jacques-Yves Cousteau in 1956 during the first screening of his documentary The World of Silence. At that point I discovered a universe that was to become the source of a new fascination. Later, I began studying at the Ecole des Beaux-Arts and then did a course at the Paris Institute of Oceanography, before enrolling at the Université d’Urbanisme de Vincennes and the l’Ecole des Arts et Métiers and eventually becoming an architect in 1972 and combining these two areas of interest. I‘ve been incredibly lucky to live at a time in our history when my passions are naturally mingled with the development of humankind.

In the speech you gave when you joined the Academy of Fine Arts of the Institute of France, you said “the architect must sublimate the curiosity and the passion of others”; but prior to transcending that of others, must he not sublimate his own?

Yes of course. That is very important. Passion is key and must be at the heart of every adventure. That is what makes people tick, gives life meaning and instills a sense of pride. It’s the combination of all these ingredients which makes you excel. Every child in the world has a dream and then life, society or certain interactions tend to make you lose sight of it, reformat yourself and finish up by deceiving and betraying your inner nature. So you need to be able to overcome these difficulties and find the strength that propels you onward and enables you to do exceptional things.

Is being able to marvel at the beauty of the world indispensable in imagining and driving new projects?

Yes, but you have to remain clearsighted and not be naïve. There is a beauty about the world that must be appreciated and enhanced, but one shouldn’t forget how hard the same world is. Thanks to my parents, I have always travelled. After Abidjan, I journeyed through the whole of Africa, Asia and America, discovering completely different cultures, the mingling of which compose the beauty of the world that touches me deeply. The ability to invent, to design new technologies are the foundations of human genius but one shouldn’t forget that although man is capable of the finest actions, he also knows how to be a predator and a destroyer. I live in a planetary system in which there are many difficulties: coastal overpopulation, pollution and particularly oil-related pollution, the destruction of coral… However, having taken due note of this, one must move on. Sometimes it is disasters that force you to surpass yourself!

The underwater world is not in fact the silent world that is often referred to; would you say one needs to know how to listen to it, to hear its unnoticed sounds, to allow oneself to be surprised and to face the unknown?

Absolutely. Jacques-Yves Cousteau knew that better than anyone. At the time, the title of his documentary was symbolic and even provocative. The ocean is a world of noises, sensations, vibrations: an immense three-dimensional space that is the origin of life, where the infinitesimally small and infinitely large live side by side, and where millions of species and their way of life remain to be discovered… a truly incredible universe!

You like to remind people that the ocean will give rise to future civilizations: Jacques-Yves Cousteau referred to the rights of future generations. Is it on their behalf that you continue to dream up new projects?

Yes. This is why my Foundation organizes a competition and awards prizes in different categories – in order to give young people the means to act and build a way of life which values the planet’s wealth. This year, more than 700 entries have been submitted by young enthusiasts from 67 countries with amazing profiles putting forward incredible projects that are viable, brilliantly and realistically thought through, and which will shape the world of tomorrow. It is a wonderful message of hope!

Do you think that tomorrow the world might be more sea than land based?

Yes, if one considers the world from a freshly global perspective and through a new way of thinking that better integrates the oceans, which are a source of innovation and solutions for the planet and whose immense potential offers us a better way of life. I am a member of the Blue Society, an Alliance that brings together individuals and organizations who think that certain solutions to the economic and ecological problems of our planet are partially to be found in the sea. Endless things still remain to be imagined and another future is possible – but it is up to us to invent it while maintaining a sense of reality and responsibilities!

Based on an interview by Alexandre Mollard 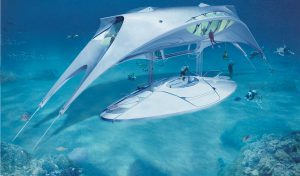 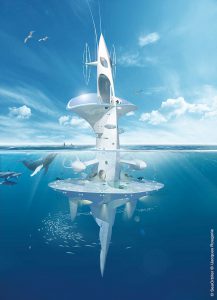 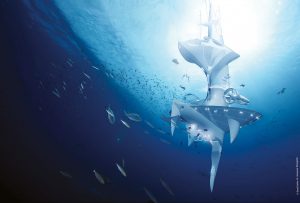 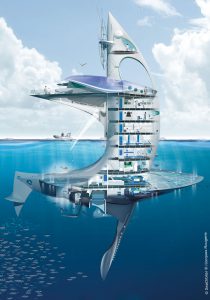 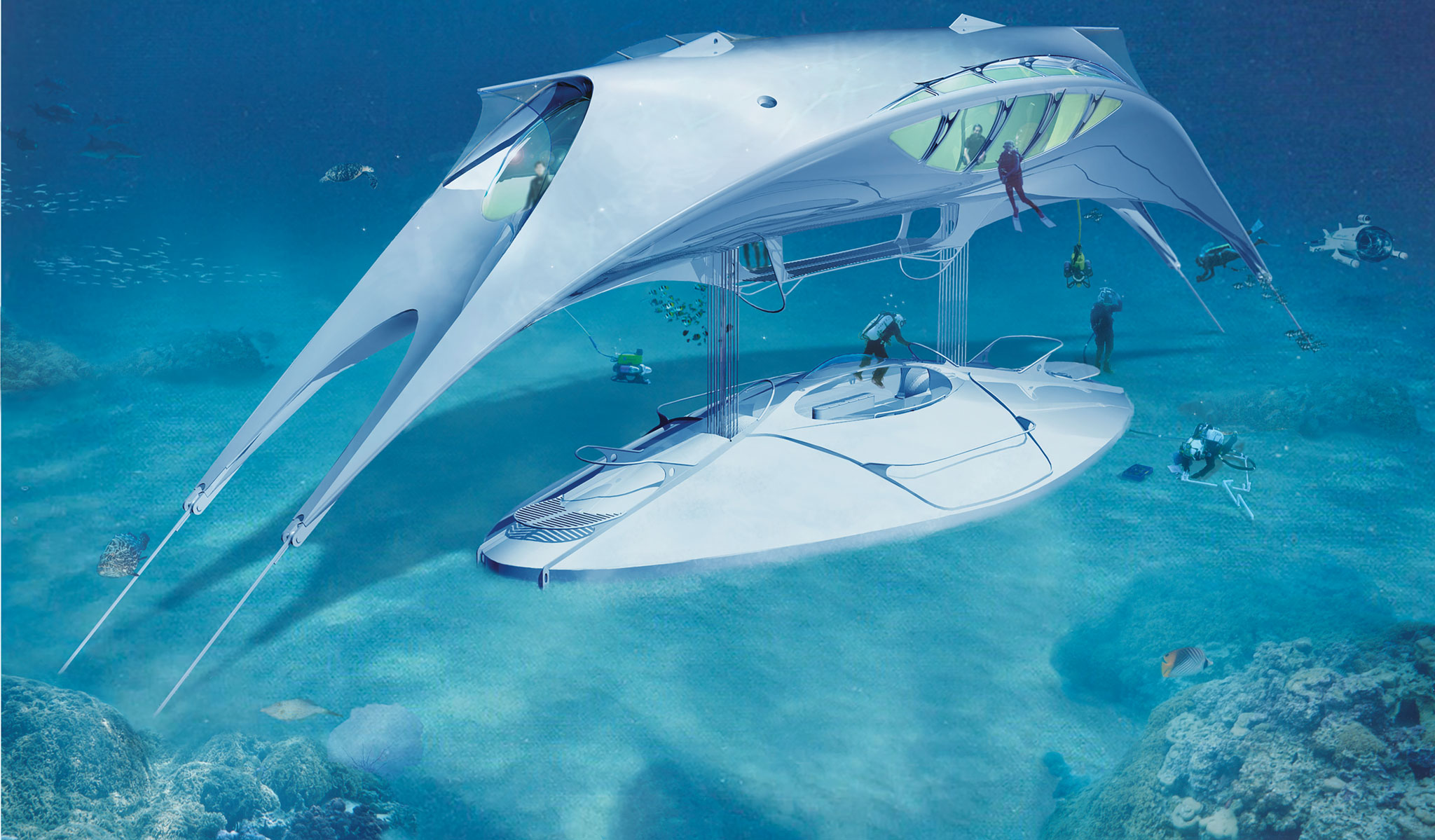 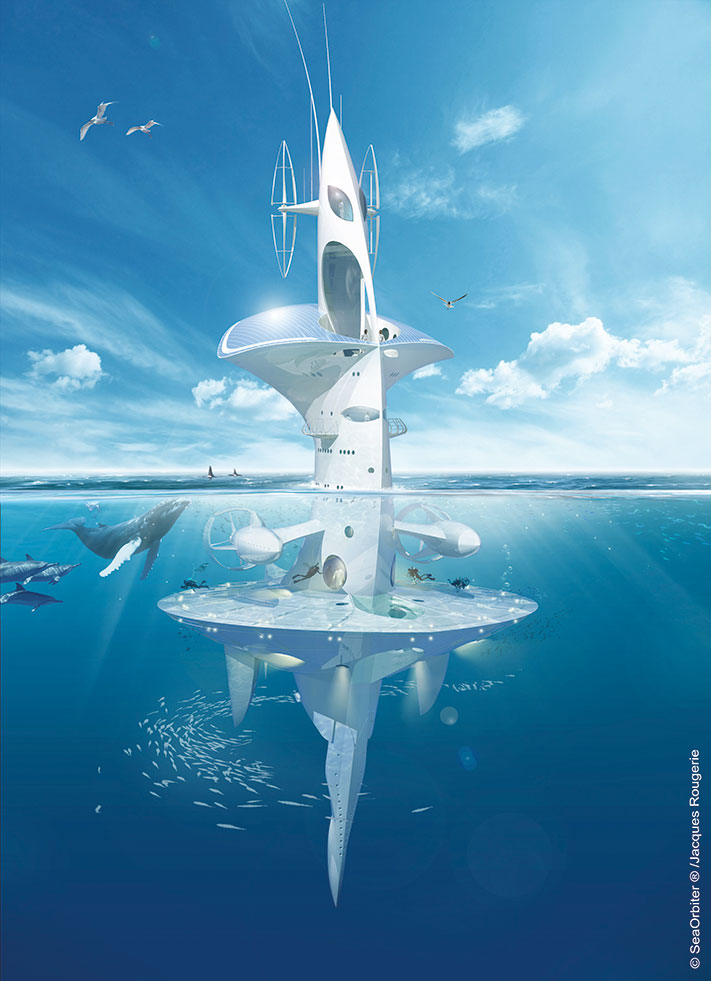 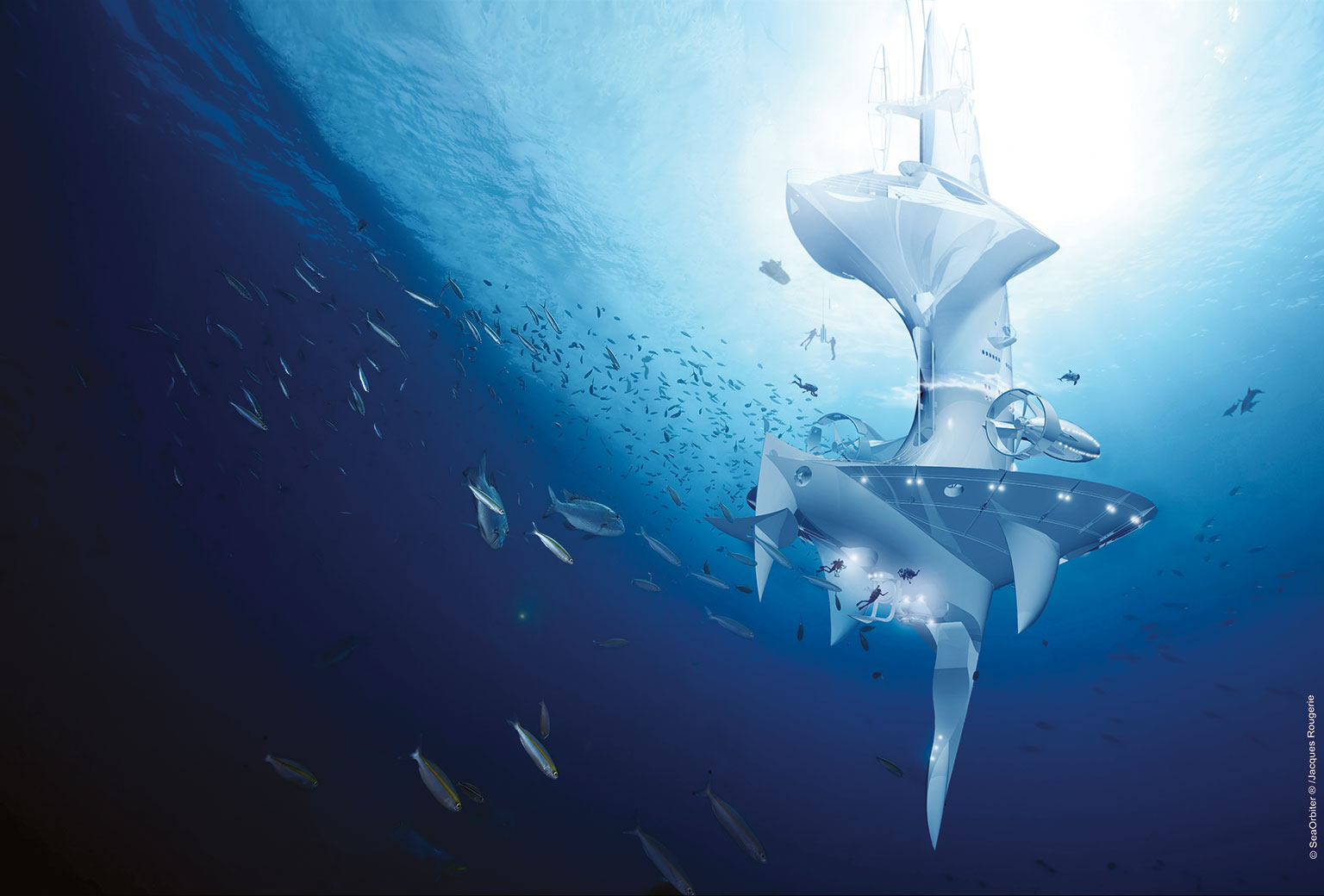 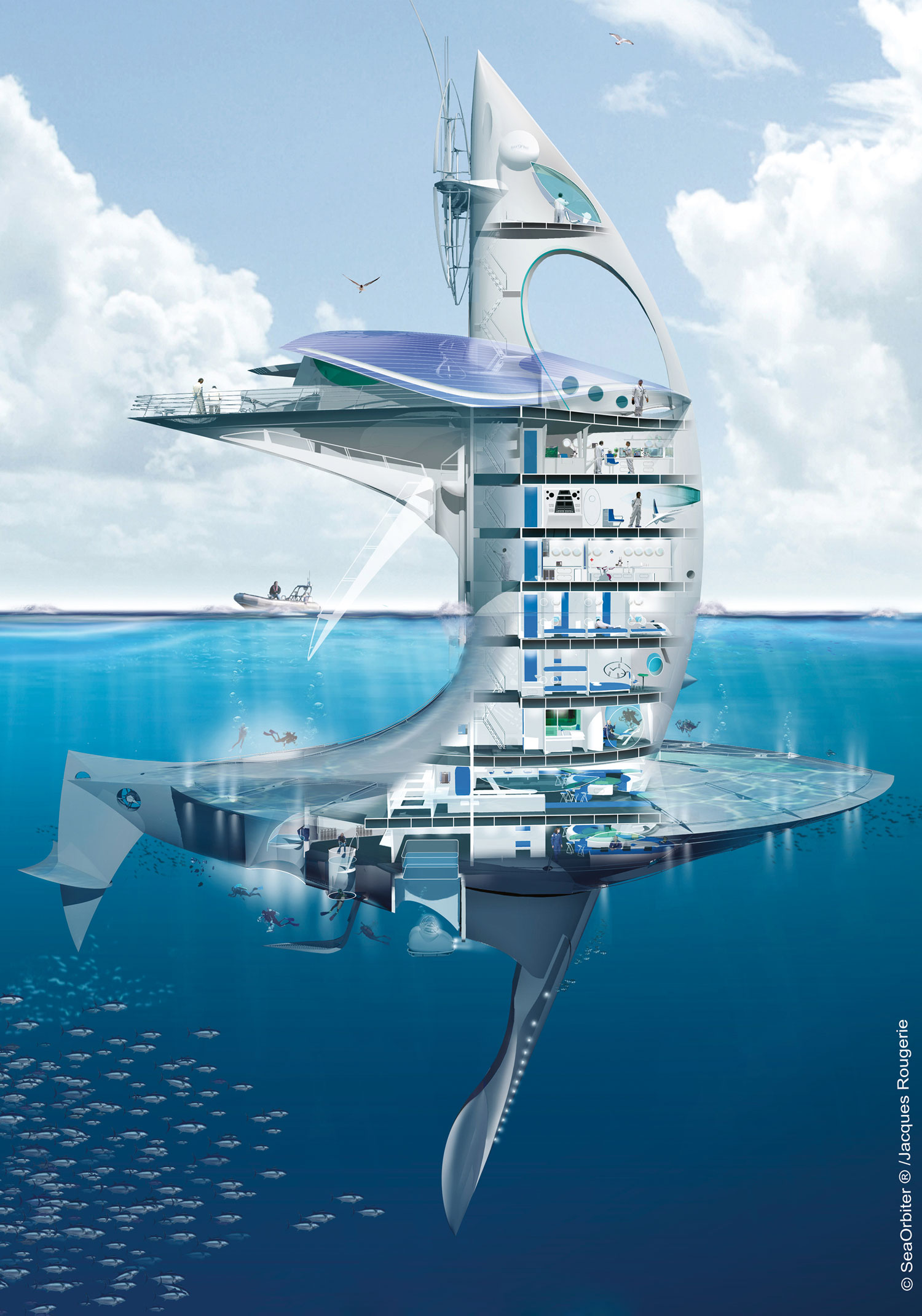 The winning project in 2006 international competition for the Alexandria Underwater Archaelogical Museum - Egypt.

– Interview – Raphaël Enthoven a philosophical stroll around the theme of wonderment Accurate wording, fast-paced delivery, thought patterns that are both deep and airy: Raphaël Enthoven cultivates a close relationship with wonderment. He agreed to discuss his enthusiasm regarding this “fundamental” philosophical subject with us in a captivating and astonishing interview. Professor of philosophy […]

Aging youthfully and more if possible

Aging youthfully and more if possible The most recent scientific discoveries and latest developments in digital technologies open up staggering prospects in the realm of health and longevity. Eternal life… an ancient fantasy which leaves nobody indifferent. The idea that aging could be a reversible phenomenon and that as of today one can stack the […]

Olivier Kuntzel & Florence DeygasStrokes of genius There are two of them… and each is unique. Their brushes give birth to whole worlds of inventiveness and utter poetry. From the title sequence of Steven Spielberg’s Catch Me If You Can movie to the Parisienne in Guerlain’s “Little Black Dress” campaign and on to the “MiCha” […]

A glass brimming with joyfulness

– Gastronomy – A glass brimming with joyfulness No party or celebration takes place without champagne – the drink universally regarded as synonymous with special moments and which has been unceasingly loved, adored and savored through the centuries by celebrities and ordinary people alike. What exactly lies behind the bubbles providing such a wondrous feast […]