Author of “L’étonnant pouvoir des couleurs”, (The Astonishing Power of Colors), a best-seller explaining the in uence of the chromatic palette on our moods, on how we learn and on our creativity, Jean-Gabriel Causse is back with “Les crayons de couleur” (Colored pencils), a novel that makes one wish to repaint the world so as to make it a more joyful place to be.

How did color come into your life?

I was beginning to get a bit bored with my work in advertising, spending more and more time in meetings rather than developing ideas. One day, while I was looking to move in a different direction, I spilt wine on my white T-shirt, and our subjective reactions to colors became instantly apparent to me. I realized that telling people this T-shirt was a “Château Petrus” color made it interesting! This incident sparked my wish to launch a consulting agency on communication through colors, together with a collection of T-shirts flaunting amazing colors: Mona Lisa’s eyes, Bertillon raspberry sorbet, as well as the exact shade of the “blue planet” which gave me a chance to work with the NASA and the calibrated images taken from Apollo 17. The ensuing success far exceeded my expectations, bringing me unanticipated access to the London and Barcelona fashion weeks, excellent visibility in the Galeries Lafayette and Au Bon Marché, and even an article in The Times. Commissioned by the Japanese group Onward Kashiyama to design events on the theme of color, I notably transformed several department stores into a giant museum and invited 13 brands to present collections in the subtle nuances of an impressionist painting. I was then contacted by child psychiatrists Marcel Rufo and David Da Fonseca, who asked me to rethink the colors of the Salvator Hospital in Marseille...

Was that an important step?

A decisive one. This was no longer a question of working on the marketing aspect or on trends related to colors, but of de ning which hues could help autistic, depressive or anorexic children to feel better. My experience had proved to me that colors do indeed have astonishing power. Like many people, I was aware that blue is soothing and that red is energizing, but I couldn’t explain why nor how. My investigations then led me to discover the neuroscience research done by many universities, notably including the work of University of Rochester Professor Andrew J. Elliott, which demonstrated, backed by MRI scans, that the brain’s reactions vary according to the colors being observed. The expression “seeing life through rose-tinted glasses” is based on a reality! When you look at a pink wall, you activate exactly the same zones as when you see pictures of happiness. In this respect, a fantastic experiment was conducted in a classroom where all the walls were painted in pink. The children’s drawings immediately became more optimistic, filled with larger suns and broader smiles! So pink is one of the very positive colors that are ideal in a hospital.

You chose different colors according to the disorders from which the hospitalized children were suffering?
We actually listened to their preferences and ensured there was a wealth of colors everywhere, so there was something for everyone. The rooms feature a predominant color scheme, complemented by other shades. Whenever possible, children choose their room, and in any case they have white boards and colored felt pens enabling them to inject their surroundings with something of themselves and to adopt the place. In the cafeteria, we wanted a color that would stimulate the appetite, but in a gentle way, so we opted for orange. Close to red on the chromatic scale, this color also activates communication zones, making patients want to come and get together, if only to chat among friends.

Colors are also associated with symbolic and cultural virtues?
Absolutely, and it is incredible to realize that our ancestors empirically sensed the now proven influences of color. For example, theaters are red the world over and neuroscience has shown that this color enables the audience to be more attentive and the actors to present a warmer persona; whereas blue would carry each individual away into their own personal reverie or even into a deep sleep. Green is another case in point. Both warm and cold, this color that is right in the center of the visible spectrum activates the zones relating to relaxation as well as those of concentration and imagination. It is thus ideal for accompanying reading, which explains why we have always loved reading in parks and why so many libraries are green: Oxford, Cambridge, the French National Library in Paris... as well as the one where we are currently seated for this interview, at La Réserve Paris.

Do we all have the same perception of colors?

No two people see colors in the same way. Research has recently shown that men have a warmer vision than women and that the more we spend time with nuances, the sharper our vision becomes. For example, Eskimos have about a hundred words to describe the in nite variations of white present in their snow-colored elds of vision.

What type of discoveries is neuroscience likely to reveal in the coming years?
I think it will con rm that we have a deep need to live amongst colors, because they do us good. In India, in Africa, in South America and in the southern United States, colors are everywhere, whereas in the West as a whole we have been progressively eliminating them over the past 20 years or so. Take a look at cars or textiles: black, white and gray reign supreme. Why not, providing they are enlivened by the vivacity of red, the warmth of yellow, creativity of blue? Designers must implement the findings of neuroscience research in leading us back towards vibrant, life- giving colors! 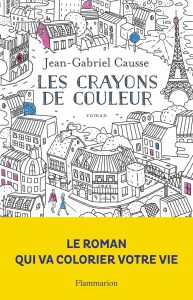 Is that the message of your new novel titled “Les crayons de couleur” (Colored pencils) and published by Flammarion ?

Absolutely, it tells of a world where colors no longer exist, a sad gray world saved by a woman born blind and who has thus never seen colors, who does all she can to ensure that those who are not visually impaired can recapture them. We are currently working on a movie adaptation. If people no longer see colors in the same way after reading this novel, I will have accomplished what I set out to achieve.

A history perpetually bound up with mountaineering

Back in 1853, before becoming the charming place where you now love to stay, the establishment was a modest wooden chalet.

Le restaurant treats itself to a new interior design

The Mont Cervin Palace has entirely revisited the decor of its “Le Restaurant”, offering an atmosphere featuring warm and welcoming colors subtly recalling the gentle shades of surrounding nature through the seasons.

Between land and sea in the mountains !

The Crans Ambassador is innovating for this new winter season with an offer uniting the nest produce from land and sea for lunches.

Youthfulness, an art of living !

In the magnificent resort of Interlaken, guests can combine the pleasure of mountain sports with Nescens Better-aging programs.