From grape
to glass

Thoughtfully served, the first thing one does is to examine its robe, which one inhales. We know that it will be delicious from THE VERY FIRST MOUTHFUL. Behind this art, the art of winemaking, lies the complexity of the vines, the soils, terroirs and the sun exposure. GRANDS CRUS, GREAT VINTAGES, are only possible with a combination of man’s expertise and intervention of Mother Nature. Welcome to COS D'ESTOURNEL.

It all begins with the soil

A Second Cru Classé, Cos d’Estournel is located in the municipality of Saint-Estèphe in the Médoc region. In 2001, a complete mapping of the soils revealed 19 different types! Understanding them is a major asset because varieties tend to prefer some and not others. Against this background, it was possible to subdivide the plots in such a manner that the estate’s 800,000 vines are in the place that suits them best. Isolating groups according to grape variety (Cabernet Sauvignon, Merlot, Petit Verdot and Cabernet Franc), age (certain vines are more than 100 years old), sun exposure and quality gives those working with them the best possible chance to see this vintage become one of the most highly regarded wines in the world.

The vines are pruned from mid-November. A special feature of Cos d’Estournel is that each of the 16 winemakers always work the same plots, namely some 40,000 vines. This ancestral method allows them to develop in-depth knowledge. The vines are attached, the dead growth removed. The mortality rate is estimated at around 2 to 3 per cent per annum. From February onwards, the earth around the trunk of the vines is removed and shifted to the middle of the row. This gives the ground a chance to warm up, thus also helping the organic matter to mineralize.

The softness of spring

At the beginning of May, the winemakers plant the new seedlings. Their older counterparts have begun to grow. Vine by vine, the winemakers remove superfluous shoots by hand. For the next three months, they go through them again and again, cutting where necessary. The good shoots on the other hand are guided by strands of wire, a process known as lifting.

To give the vines the best possible chance, independent of the weather’s influence, the drivers work the ground and clear weeds. Nothing must interfere with this. Until August comes around, the most important thing is the climate. Ideally, the vineyard must be thirsty until the end of June. It is proven that a hormonal system encourages it to stop growing in July as a result of this lack of water and to focus its energy on the grapes. Everything that can reasonably be done by human hand, in the noblest and gentlest way possible, is coming to an end. 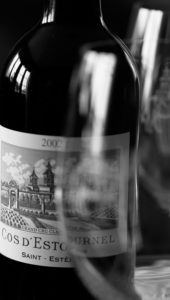 From harvesting to bottling

At the end of September, it’s harvest time. The bunches are sorted, the less attractive ones put aside and the leaves removed. The grapes are stripped from the stems and each one separated. They are lightly crushed in a machine and sent to the vats. The pips provide tannin while the skin provides both tannin and color. A meticulous task is performed twice a day: removing the juice from the bottom of the vat and reinserting it from the top. Maceration and vinification do their work. Subsequently left to rest for three
weeks, it performs its own work. The time for tasting arrives. When that time is deemed ripe, the wine is run off. Any liquid still adhering to the skin and pips is pressed. It is put back into the vats. At the beginning of December comes the time to blend and the art of finding the right balance. When the tests are validated, the Cos d’Estournel wine is loaded into French oak barrels for around 15 months. Once it has reached maturity, the deposits are removed. The wine is put back into vats and only two years after it was harvested is it bottled, labelled and dispatched, to the great delight of the enthusiasts who will relish this authentic Grand Cru.

A residence dedicated to the joy of relaxing in the heart of nature.

For as long as your stay in this family home lasts, you’ll be master of the house…