THE MYSTERIES OF SERENDIPITY

Creative paths are full of surprises, such as when researchers researching materials for electronic applications end up inventing a whole new blue color. YInMn blue is one of those serendipitous surprises vividly reminding us that solutions are not always where one expects to find them, as well as that chance sometimes yields excellent results. 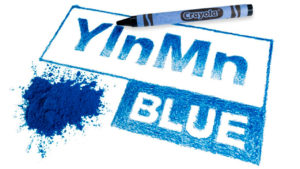 We already know Veronese green, Soulages ultra-black and the famous Klein blue tailor-made for the painter in 1960. While it’s true to say that the invention of a new color is not an everyday occurrence, that is exactly what inadvertently happened in 2009 for a professor of Materials Science in the Department of Chemistry at Oregon State University. Professor Mas Subramanian was supervising a student’s work on electronic materials and encouraging him to synthesize ferroic elements. After heating yttrium, indium and manganese oxides to 2,000 degrees Fahrenheit, the teacher and his student were surprised to see an unprecedented brilliant blue compound emerge from the furnace. After several repetitions of the experiment, YInMn blue was born, named after the chemical symbol of its core elements in addition to oxygen, also sometimes referred to as MasBlue or Oregon blue. Mas Subramanian’s team is now working on the search for other equally vibrant colors.

THE INCREDIBLE destiny OF YINMN BLUE

Some regard it as no less than the perfect blue. It is a slightly lighter shade than Klein blue, but with the same fascinating intensity. Above all, this new pigment boasts remarkable properties, since it is extremely stable, non-toxic and durable, with an excellent ability to reflect infrared rays which is rare among blue colors and could make it very useful in protecting buildings from heat. Patented since its invention, it is very difficult to obtain and extremely expensive: about $1,000 per kg for small quantities. Although no painter has yet added his name to the YInMn blue pigment, several companies, notably American and Australian ones, already sell it. This shade is very close to ultramarine and its durability means it can be used to restore paintings. The well-known crayon company Crayola has added it to its palette under the name of “Bluetiful” in the original English and “Ébleuissant” in French – a play on the words for dazzling and blue. A fine opportunity to make pretty drawings...

SERENDIPITY, THE MEANDERING PATHS OF INNOVATIONON

Human history is full of fun or brilliant innovations born of serendipity, a term that refers to the art of making unplanned, fortunate discoveries and applies to many situations in everyday life or history. The fact that Christopher Columbus discovered America while searching for India was due to serendipity, which should not be confused with chance, according to the specialist Danièle Bourcier, a researcher at the CNRS*. Practicing serendipity implies “being capable at a given moment of taking advantage of unforeseen circumstances”. Louis Pasteur once said that chance favors the prepared mind, and much the same goes for serendipity: one must be open to the adventure of uncertainty and it is an attitude that must be nurtured.

BY MISTAKE, BY CHANCE, INADVERTENTLY, DUE TO NEGLIGENCE… 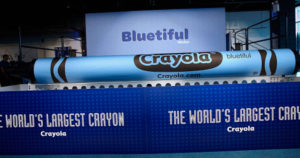 y A+B, even in the field of science. Among many other innovations, Nylon®, Bakelite®, the microwave oven, Pettit’s boat propeller, Post-itTM, viscose, REM sleep and dynamite were born of serendipity. Among the stars of serendipity, one should also mention the mythical Tatin apple pie, which legend has it was inadvertently flipped over and put back in the oven by the Tatin sisters. Finally, a word about Velcro®, invented by Swiss electrical engineer Georges de Mestral in 1941. Intrigued by the Burdock plant burrs that clung to his socks and his dog’s fur after each walk on the shores of Lake Geneva, he discovered the secret and used it to develop Velcro® fastening – an adventure that took him ten years. Serendipity therefore presupposes having an open attitude and being single-minded…

« Art in all its forms
Jean Todt – A perpetual winner »